I should start by saying that this has never been an area I have felt called to share on. However, after having such an interesting awakening from my IUD experience I feel like it’s important to share about my thoughts and insights on the process I went through in order to encourage, empower, and inform other woman (and men) about the topic based on what I have learned through it.

Three and a half years ago I decided to get the Skyla (or Jaydess) IUD as it felt like the best form of birth control for me at the time. The first three years of having my IUD were practically flawless. I occasionally experienced spotting and could notice my hormones cycling throughout the month as most menstruating women do, however I never actually had a full period nor did I noticed any significant changes to my body or mood (aside from not getting a period).  The “expiry” for my IUD was up around December 2018, so I got it removed that month. The removal went seamless and there were no major issues to report.
I decided I wanted to let my body “re-adjust” after getting my IUD out before I got another one put in. Much to my satisfaction I received my first period a few weeks following my IUD removal.
After going through 2 full menstrual cycles, I decided to get another Skyla put in, Feb 2019. Insertion was easy and similar to the last one. However, I noticed things starting to feel a little “off” a few weeks after insertion.

Here are some of the symptoms I frequently experienced with my second IUD:

Once I clued in that all my symptoms were likely hormonal imbalances and related to the IUD, I decided to speak with a midwife who recommended I give it 6 months to let my body re-adjust back to the IUD. We decided if I was still feeling these symptoms after 6 months from the date I got my IUD in, then I would for sure remove it from my body.
As the months continued, my symptoms did not get better. In fact, a lot of them got worse.

I went to the doctor in July (the 5-month mark) and explained my situation. Not surprisingly, she advised against removal of the IUD. The doctor told me these were not often common symptoms of my Skyla IUD and suggested that I would likely regret my decision to remove it. This left me with a sense of guilt and irresponsibility for not accepting a perfect “empirically researched” birth control method. However, this wasn’t even the worst part of my doctors trip. Once I had convinced the doc that this was truly what I wanted, when she went to take it out, she wasn’t able to locate the device. Long story short, I had to go for an ultra sound to locate the device in my body. It was found to have migrated up my uterus and the strings had disappeared. This meant I would need a referral to a gynaecologist in Vancouver to get it out. Thankfully, the gynaecologist was amazing and so supportive and with some special tools and handiwork he was able to remove it. It was super painful, I experienced a lot of bleeding, and some intense cramping, but it was successfully removed!

First of all, the Skyla IUD is created by Bayer (as are the similar and commonly used Mirena and Kyleena IUDs). For those of you who aren’t aware, Bayer is the same company who recently bought out Monsanto; who happened to be the world’s largest producer of glyphosate and “Round Up ready” GMO crops. This company is responsible for polluting the food we eat, along with our air, soil, and water with deadly toxins. Being so passionate about our food system and well versed in this information, I don’t know why in the world I would have trusted this company to create a device to be inserted into my uterus!

Secondly, I have spoken with handfuls of women who have had similar experiences to me with their IUDs. Not to mention the thousands of women who have, and continue to, sue Bayer for their extremely traumatic IUD experiences. Many of these woman experienced their IUDs migrate completely outside their uterus, causing severe medical implications! You can read about a few stories of these brave woman here: https://www.dolmanlaw.com/stories-women-suing-bayer/

Why do I think IUD’s and other forms of Hormonal Birth Control are Problematic?

Hormones run the show in our bodies. We cannot alter them to the extent that ensures we aren’t fertile enough to have babies, while simultaneously expecting no harmful side effects. Even though many claim that the effects of the hormones from IUDs remain localized to the uterus, our bodies are too smart for this!

Menstrual cycles are a gift. Although they often feel far from this, I deep down know what a blessing they are. They’re the reason we as women can bring new life into this world. Not only that, but the changes in hormones that women experience throughout the month help them to be the driving creative forces that they are in this world.

Although in some ways, modern forms of birth control can be sexually empowering for women, in a lot of ways they are completely disempowering to the brilliance of the female body. They jeopardize our health, mental well being, and long term fertility. The birth control pharmaceutical industry has been male dominated for so long. This industry has been creating female centred birth control since the 1960’s (oral contraceptive pills to begin with) yet still have not come up with a viable male option! I think this is ridiculous given where we are at in science today. I am certain if the appropriate time and energy was put into designing a safe male birth control, it would absolutely be on the market.

I should also mention that the hormonal Birth Control industry has had highly corrupt roots from its earliest days. Back in the 50’s before the pill was out on the market, researchers tested on the woman of Peurto Rico. The laws were less regulated there compared to the United States and many Americans in fear of “over population” felt like it was the perfect community to target. They viewed these woman as, “hopeless, ignorant, vicious, and less intelligent than their American counterparts.” You can read more about the corrupt and tragic history of the birth control pill here: https://www.thecrimson.com/article/2017/9/28/the-bitter-pill/

So What Can We Do?

A few other things I wanted to note:

Thank you for reading!!

Also a huge shoutout to my editor and best friend, Rhaya Howich for all her contributions to this post! 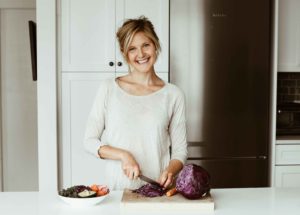 Hi! I’m Meg. a holistic nutritionist who specializes in nutrition for anxiety & gut health. I'm also an avid gardener, and creator of simple, whole food recipes.
In my spare time, you can find me growing veggies in my garden, making a mess in the kitchen crafting up new recipes, or wild/urban foraging my way around wherever I go – yesss, I’m for real about this!